Me and Mamie O'Rourke

Fall is now well underway, though in Southern California temperatures are still in the mid 80s or more during the day. Nonetheless, there's something of the feel of fall, with a background of impending coolness to even the hottest days and the peculiar way the light reflects at this time of year, giving everyday things a special clarity.

Me, I've had enough of 100+ temperatures, which was pretty much all I encountered last summer wherever I went. For five weeks, from June 12th to July 17th, I was away from San Diego. It was my first return to the Washington DC area since 1994, when I'd been in Baltimore for a conference and spent a couple of days afterwards there. I was stationed in DC two different times with the army, with a three year tour in Frankfurt sandwiched between. Jerry Ford and the Bicentennial festivities are my main memory of the first time, and the Iranian hostage crisis that clouded Jimmy Carter's last year in office dominated the news during my second time in the Military District of Washington, or MDW (which I like to call M.D.Dumb-ul-you).

Five days was enough to do what I wanted to do there. I stayed along Wilson Blvd. in Arlington and rented a bicycle to get around and see the old haunts. Though he grew up in San Diego, my boyhood friend Billy, and his mother, are interred in Arlington Cemetery. It was an adventure to find their marker, which included me getting locked into the cemetery after closing time on a Saturday late afternoon. I'd parked at Fort Myer, near the site of the old Building 403, which was demolished some time ago. Having lived there for a long time, it wasn't hard to figure out how to jump the wall back onto the base without attracting attention (I won't say how, but it was a common maneuver when I lived there and still works). Then I had a look around, and even walked into the recreation center and talked with some old-timers about the new construction and such.

There was a visit to George Washington U. that following Monday, where I signed documents to include something for them in the trust I'd drawn up the month before. Then I biked over to Buzzard Point in Southwest DC, a relatively unknown place whose federal buildings include Fort McNair, the U.S. Coast Guard Headquarters, and the Half Street Building. The latter was where I worked during my second tour, though it's no longer DoD but the headquarters of whatever the special police force is that is responsible for guarding federal buildings throughout the U.S.

A complex of temporary buildings dating from WWII also once stood along the eastern wall of Fort McNair, but were finally removed sometime after I left the army in February 1981. Robert Oppenheimer was interrogated in early 1954 in a temporary building that might have been part of this complex, and the entire complex housed the 1981 Presidential Inaugural Committee; perhaps that for previous years as well. My last duty days with the army were spent participating in the setup of the Mall for Reagan's first inauguration.

At the base of the point is the marina. I'd moved out of Building 403 at Fort Myer and lived at the marina in my motorhome during the last part of my second time stationed in DC. Had read an online article about Buzzard Point, how the marina no longer had residents other than the long-time caretaker. I saw his boat docked alone in the corner, the same one he'd had 35 years earlier and in the very same place as always. I walked around awhile, but though I'm sure he'd have remembered me after a bit I didn't want to bother him unless he noticed me first.

He didn't, and one of those very strong perceptions of time and place was burned into my memory in that moment. The marina was completely deserted, isolated, and peaceful. Though less than a mile from the U.S. Capitol, it seemed idyllic and pastoral, almost otherworldly. The only sound was that of the river slapping against the dock irregularly, and a few cooing birds. I sat there at a picnic table thinking a bit. Billy had been a Coast Guard officer, stationed at the headquarters building several times himself, though our tours of duty never overlapped. He'd bought a place in Southwest DC and settled there, until a bicycle accident resulted in a concussion that eventually caused him to have a stroke and die, right there while crossing the National Mall.

DC is not really what this story is about, though. I spent a few days in New York City afterward, catching the train up, then taking another train all the way to Miami to stay in my Miami Beach condo for a month, before flying back to San Diego. For some reason, that entire NYC leg of the journey feels like one strong perception of its own. I've looked at maps of NYC from time to time in my life, and had been there a few times before, most recently in 1991. After this visit though, I can picture in my mind the places on the map and their relationships to each other, geographically anyway. This is a common enough human experience, I'd figure, where the things you've read about and looked at for a long time finally come together like pieces of a resolved puzzle.

I brought along a copy of a song and its woodcut illustration, "Sidewalks of New York," taken from an elementary school children's songbook from the mid 1950s. You can see it below. Then I went searching for the place pictured in the woodcut. I was staying near Penn Station in the middle of Manhattan, and was struck by how so many of the famous things you associate with NYC are within a short walking distance of each other. The site of inspiration for the illustration in the book was too, a few blocks down the street from the Empire State Building and Macy's, near the East River.

"Things have changed since those times," as the song says. Yet it's clearly recognizable as the spot where the artist drew his inspiration. It was an ordinary neighborhood then, perhaps with an organ grinder plying his trade on the corner from time to time and any number of old brown wooden stoops. It's still kind of an ordinary neighborhood, by the standards of new millenium Manhattan, I guess.

One of those factoids that stick in my mind is that the long-time mayor of NYC, Fiorello La Guardia, spent much of his boyhood in Prescott, Arizona, where his dad was an army band leader at Fort Whipple, now the site of the VA Hospital there. You can see the plaque dedicated to him on the La Guardia Bridge in Prescott as the last photo below, taken during my visit to Prescott earlier in June. As described in the previous entry, I've had a 4.4 acre place there for a number of years, and came upon the plaque by chance several years ago. As a boy, Richard Nixon was also a sometime resident of Prescott and worked at the annual rodeo in the summer... but that's another story.

Apparently, La Guardia was teased as a boy when an organ grinder visited Prescott and his father befriended him as a fellow musician. It's a story you can find online, but the point here is that La Guardia banned organ grinders from the streets of New York during his time in office, apparently for that very reason. He thought the job was demeaning to Italian Americans, and because he could do pretty much what he wanted as mayor he forbid them to go about cranking their organs within the city limits!

The illustration shows a car with large fins, which would place the illustration in the late 1950s, the time the songbook was published and used as a California State textbook. It was a contemporary woodcut then, produced less than a decade after La Guardia had left office. This is a small and maybe insignificant thing to ponder, but it shows how each day you learn a little bit more and add a few more pieces to the puzzle.

The song itself, "Sidewalks of New York," has a nostalgic, wistful quality, and it's strange to think of someone early in the 20th century feeling inspired to write a song that longs for the times of his childhood late in the 19th century. There's a sweetness to that, even though we know that life in the big city is not all sweetness. Partly from this experience, I came to feel a liking for NYC in a way I never have felt before. It's a package deal--some good and some not so good--but overall I get a pleasant feeling when I think of the place.

Who was Mamie O'Rourke, the woman mentioned in the song? You can look that up online too if you wish, but to me she represents that little corner of every man's mind that wants to idealize at least one woman whose path he's crossed in his life, no matter how harsh that life has been to him. Have a look at these two short video clips, the first taken from "Citizen Kane" and the second from "City Slickers:"


The similarity is striking, isn't it? In a sense men are just softies, regardless of what the facade presents. As Orson Welles, creator of Citizen Kane, once put it, "Men created civilization to impress their girlfriends."

Women are perhaps more romantic in their day to day thinking, but at the base of things they're iconoclastic realists, worried about the next meal and the mortgage payment and such. Men are providers, guardians against the chaos that life can bring to their women and children, but at heart there's a lot of Bernstein and Curly and the author of "Sidewalks of New York" in them. They long for something that they know probably doesn't exist, and it's probably no more insane than some of the things women habitually do that caused Confucius to opine that women "want fried ice.". 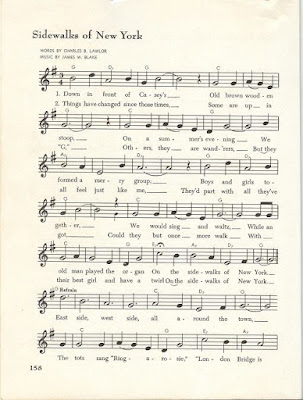 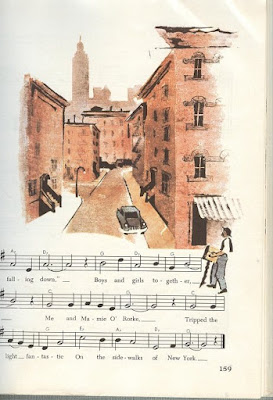 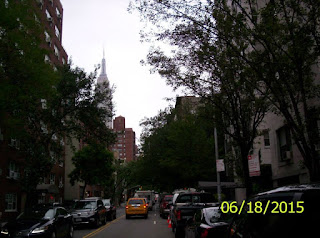 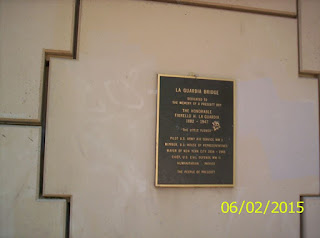